America and the Nature of Political Will

Obama ran on “Hope and Change” as his motto in 2008. He is term limited by the Constitution. He cannot run again as things stand. When he won he used the crises of the wars in Iraq and Afghanistan and the financial crisis to power the election bid. Now we have a complex and brewing racial violence crisis which has reached a new peak and focus with the  Charleston shooting and its aftermath. This comes out of a long past and  the struggle with that past is also deeply relevant. It is also in the news.

It is clear that political mileage will be made out of all of this. What is not clear is who will make this situation most effectively part of their plan to change things. The main change is often to increase their own political power.

The Democrats on their official site do not at the time I am typing this reference the Charleston shooting or the Confederate flag on their home page or the prominent pages of their website. It may be that the events and their coverage have affected placement of other website elements on their site. The Republicans on their official website had not yet singled it out either but the homepage prominently displays an image of Abraham Lincoln who founded the party and fought against and destroyed the Confederate States of America. In the most prominent montage on the site featuring prominent current Republicans as I just looked the site had the Republican Governor of South Carolina who has called for the flag to be moved and removed place in the most prominent upper left corner of the group of images. 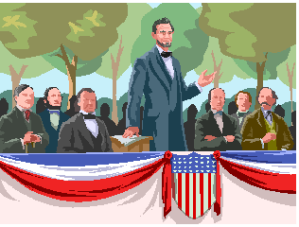 Gettysburg settled upon our country many parts of a new consensus . . .

What then is the significance of this killer’s use of the flag in a set of pictures? What is the response to the response to those images? There was a small box prominently placed on the front page or homepage of the NAACP website related to the Confederate flag being removed from the Capitol Grounds in South Carolina. The article presumably will move around the site but still be available here. Well Alabama has lowered and removed the Confederate flag as can be followed here. That is as significant at least as the fact that the flag continued to wave nearby as Clementa Pinckney laid in state as was his right in the nearby capitol.  In Virginia it seems they will discontinue Confederate emblem license plates. These two former Confederate States certainly demonstrate a great deal of serious and prompt action on this subject. These various governor’s calling for symbolic changes are not politically identical. But there is a presumption in some places that partisan politics is at the heart of this entire discussion.  Prominent novelist, my long-time Facebook friend and blogger David Brin takes a partisan view as a democrat that you can reach here. His take is at least bordering on hate-mongering but David Brin is a relatively unique person coming from a relatively unique place and neither a politician nor a journalist.

When I led the Crater Cap Colony Concept Group on Facebook we had a very diverse group from around the world but some American memebers were unique in approaching me with the request that I discontinue the emblem featuring the American flag.

Certainly politics will continue to play a role in the direction in which things move. But the issue transcends electoral politics. Walmart, Amazon, E-bay and others have decided not to sell images with the Stars and Bars anymore.  The cost of exhibiting any sense of Confederate identity may well be going up in the next few years at least. What difference these actions will make to American society is not so easy to determine.  What is certain is that the reality of the nexus of race and violence in America which I outlined here is not the focus of attention for very many people in seats of power and influence and neither is it likely to become the center of a great deal of discussion. Although their has been some discussion. I look forward to the  reality of a decline in the level of really open and honest discussion about history as the vestiges of this opposition force are attacked in a new way.  Nonetheless, there is no magic formula that determines in my mind where this set of emblems should and should not be honored. The Confederate heritage is not the only nor even the primary heritage that I honor. 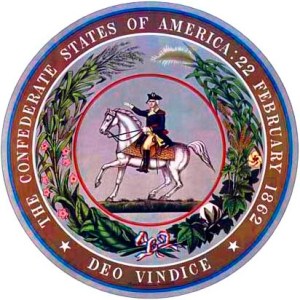 The seal of the Confederacy ties the Lost Cause to the Revolution and the past long before that war.

The crisis going on in the United States of America today is a complex and difficult  set of social circumstances to understand.  There is a great deal going on in journalism and near journalism and some has been collected by people like me and also by people like the University of North Carolina Press. It’s also true that talk radio is full of discussion, oration and preaching that is in some way connected to the Charleston shooting and before the shooting there the radio waves were to a lesser degree busy with discussion of the events related to race and violence in the rest of the country. The struggles of the people who are most affected by the violence in the country, by problematic government policies and by the racial context of our time do not constitute struggles to get elected, increase ratings or even preserve churches, flags or monuments. As it was when I posted this, I did not really much like the UNC grouping and said this about it in another place on the web.

“This may be a historical perspective on a group of journalistic articles dealing with history but neither has the balance of classic American journalism nor the depth and fullness of good history. That is a fairly damning and extreme comment about something bravely and proudly showing the UNC banner. It’s good to be sensitive to the horrors and the grief occasioned by a terrorist attack on a Bible study in an historic church.

Now may be difficult time to write things which associate the victims with people for whom they have no legal and little other responsibility. Yet, I do not think it is excusable to foster a bouquet of nearly total denial of vast parts of the truth from terrorism from the North before the Civil War, to Union atrocities during and after the war, and unceasing violence from the hardly reported (and rare) violence of the fringes of the Civil Rights movement, to dangerous and massive civil disobedience in the mainstream Civil Rights movement, to criminal acts with a racial element by African American assailants, all the way to the current nexus of race and violence centered in places like Ferguson, Baltimore and Chicago. Dylann Roof was a terrorist perhaps with psychological problems and perhaps without an organization but he was not a young man living in paradise who was crippled and consumed by delusional fantasies of race related violence. It’s alright for liberal, moderate and left-wing professors to hope that this event will boost book sales and class enrollment. It is less alright to be ridiculous even when you have isolated yourself from most of the people who could disagree with you…”

So far the official site of the Sons of Confederate Veterans has shown little evidence of being affected by this very intense time of reacting to the fact that the Charleston shooter posed with the American flag. The website for the United Daughters of the Confederacy also seems as yet to be unchanged. Both of those characterization are relevant as of the time of typing these lines and may not be the case forever. Dylann Roof has also got a site up but I have not yet examined it myself nor will I link to it from this blog until it is very old news if it survives that long. But his life has shown that people form opinions for which they are willing to kill and die outside the halls of power. His murderous invasion of the Emanuel African Methodist Episcopalian Church was part of a series of actions that responded to real concerns and was expressed in real planning and preparation — at least that seems to be the case. The Bible Study was within his vast and undisciplined hatred perhaps but not in a delusional or fantastical way primarily. David Duke, the  old Louisiana Klansman who has become far more of a champion for anti-Semitism than for white supremacy in recent years did have a few links discussing banning the flag. One is here, if Brin can be offensive then be prepared that this David can be very offensive at many levels and repeatedly.  Unlike a lot of people with opinions on Southern politics I live in the South. Although I have traveled a great deal  I am very deeply rooted here. I am doubtful that I will  really be a political prisoner in the United States. It could happen but here we are less open with oppression in most cases. The folks with Duck Dynasty, a popular Louisiana family with a national television following  are seen by some as being free from Confederate controversies. You can link to that website  which has investigated that here. I on the other hand do pay tribute to the Confederate Ordeal and its dead. The struggle is not without resonance for me.  We are not yet in a state of tottering on the edge of any kind of Civil War. We are not yet doomed to collapse into any kind of really massive form of violence. But such a thing is not impossible.  We have what it takes to find a better way forward and I have blogged a good bit about what that way might be.  For now it might  be good to look around at all the reasons for hope — there are many. But we have our problems and this is one of them– this vast problem with race and violence and politics which is finding its voice and center in new ways around the actions and images of one violent young man.

4 responses to “America and the Nature of Political Will”